Today a son remembered his father, a man whose footsteps he followed in.  Today we laid to rest the 41st President of the United States. 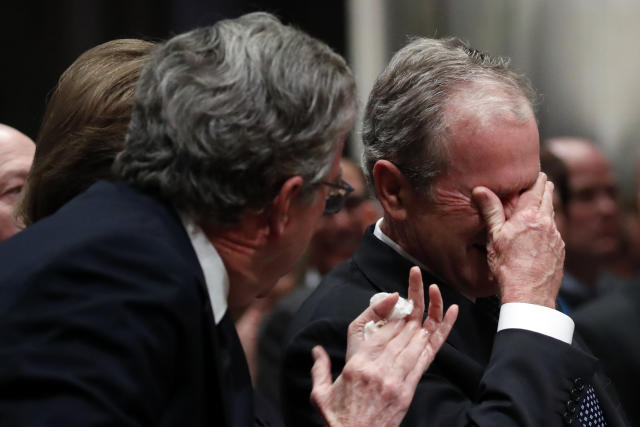 After three days of funeral events in Washington, Bush was headed home to Texas for more ceremony and then his burial Thursday. After the cathedral service, the hearse and a long motorcade drove to the National Mall to pass by the World War II Memorial, a nod to the late president’s service as a World War II Navy pilot, then arrived at Joint Base Andrews.  His arrival in Washington, DC was greeted with the roar of cannons and the breeze from the Potomac. Before leaving Texas his service dog was captured Sully was captured lying next to his owner in the funeral home.

George W. Bush broke down briefly at the end of his eulogy while invoking the daughter his parents lost when she was 3 and his mother, Barbara, who died in April. He took comfort in knowing “Dad is hugging Robin and holding Mom’s hand again.”

The cathedral was filled to capacity as the current President greeted 4 past sitting presidents.  The reception was noted as chilly because of recent remarks made by the current president.  It was noted that Bush made it a point to invite Trump to the funeral because he could not see ousting a sitting president even with the tension between the two.

Bush will lie in repose at St. Martin’s Episcopal Church before burial at his family plot on the presidential library grounds at Texas A&M University in College Station. His final resting place will be alongside Barbara Bush, his wife of 73 years, and Robin Bush, the daughter they lost to leukemia in 1953.

Writer, blogger, inspirational speaker and host of the Lady Blue Radio Show on wmskonlineradio.com, Arlene Major is a powerhouse in effect. She has a positive vibe that she shares throughout her community by bringing the positive to you. Mother of 4 and a brand new Glam-ma, her light shines thru her writing her advocacy in the fight against Intimate Partner Violence and her all around genuine personality. Her favorite quote: Weeping may endure for a night but JOY does come in the moring!

Why Domestic Violence is Taboo

How High Is your Hedge?

Baltimore Cease Fire is Back!